For the last few days I've been looking at various super-smelter designs, as I want to build something that's higher throughput than the current double-furnace design that I currently use.

I've been using automated smelters for years, but only recently started looking at increasing their throughput.  A double-smelter was quite the step up...

In looking at the different designs, and scales, especially as they grow in size, I found some design issues and some pros/cons.
All of them are expensive, though.  Starting at 8x, every design needs at least 5 hoppers per furnace (25 iron ingots), and that gets expensive in a hurry.  Especially as I don't build iron farms for ethical reasons.
Here's a rundown of the various designs that I've found, some of the issues that I've seen with them, and the general expense of building them.  Of what follows, nothing is really my own design, but this is a reference to others' designs (with credits).

It's cheap, it works, it handles multiple stacks of input, and it generally doesn't give any issues, and with the addition of a couple levers, still gives access to the XP that the furnaces have been banking up while they're auto-smelting.

The design is simple.  Double-chests for input, fuel, and output, with hoppers in between.  Just like a standard single-smelter design, just two of them side-by-side, and the double-chests allow the hoppers to both pull input and fuel items at the same time, and to push into the same output chest.

Going from 2 to 4 starts to get complicated, because it's not as easy as putting 4 hoppers under a chest.  Only 2 fit.  And doing a 1->2->4 split with hoppers and double chests doesn't work, either, because for each of the pairs of hoppers pulling from the intermediate chest, one will always check before the other (which one is dependent on the order they're placed down, and the order they're loaded when the chunk is next loaded).
So you get this: 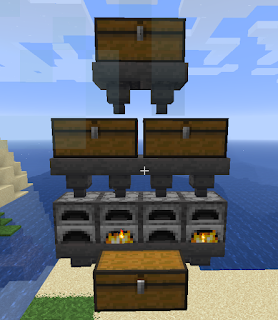 and only two furnaces ever get items.
But if the intermediate chests and hoppers are replaced with hopper minecarts, nudged off to the side so that they are over both hoppers, everything works nicely: 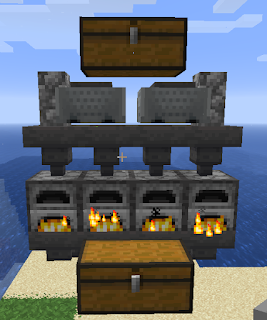 Place rails on the center two hoppers, walls on the outer two, and then the minecarts on the rails.  Nudge the minecarts to the end of the rails, against the walls, and then break the rails.
There are ways to fix the hoppers, but honestly, the hopper minecart solution is better, so long as you can make sure that nothing "falls into" the hopper minecarts.  You'll want to make sure this is well-covered and protected from mobs.
Rate:  1 stack in 160 seconds, or 1440 items/hour
Materials Cost:

Another way of building a 4-furnace array is using a hopper-pipe.  This is the basic idea used  for much larger setups, but due to how it works, I think it's overly expensive at this scale.
This is the simplest of the silent arrays, Mumbo has a video here. 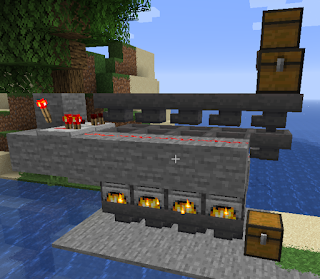 It uses a comparator and redstone torch inverter to lock a lower set of hoppers while an upper set forms a hopper pipe that pushes items horizontally over the furnaces.  When the horizontal pipe has an item reach the last hopper, the lower set is unlocked, and the items are pulled down.  And on the next cycle, they're pushed into the furnaces.
But that means that the last 4 items put into the system get stuck.  Not a problem if you're building this for a dedicated farm, but it means if you put in a stack, you'll only get 60 items out (the first time).
The solution is another set of hoppers, which pull from the unlocked hoppers before they relock, and then push into the furnaces: 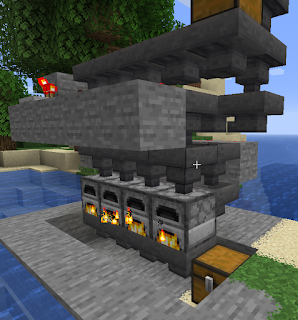 The hopper minecart design, however, can be expanded up to 8 furnaces, by some mirroring and adding some width to it, as ilmango shows in this video. 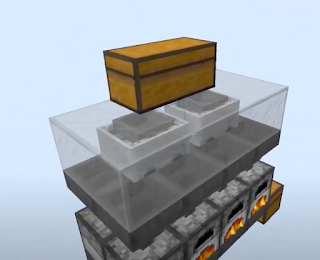 That's simple, but it needs some work to feed it fuel: 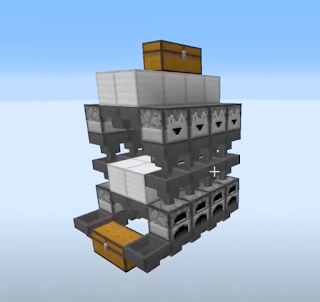 Getting the hopper minecarts into place is tricky (although this shows a way to do it without pistons).
Rate: 1 stack in 80 seconds, 2880 items/hour (45 stacks/hour)
Materials Cost:

At 8x the array is still more expensive than the hopper minecart mechanism, but might fit a build better. 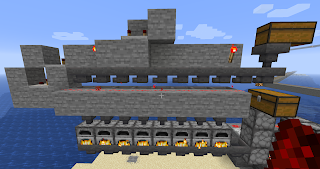 The tricky part is that the redstone gets more complicated, because otherwise a furnace gets skipped due to timing interactions between the unlocking and the hoppers being evaluated in a tick.  The solution for that is locking the upper bank and adding delays along the way, ilmango talks through it in this video and this video.
Rate: 1 stack in 80 seconds, 2880 items/hour (45 stacks/hour)
Materials Cost:

At really big arrays, the limit is ~23 furnaces, because of the time it takes the hopper pipe to move items all the way to end equals the 10 second cook time (for smokers and blast furnaces, which only take 5 seconds, it's half that). 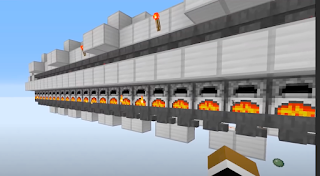 Email ThisBlogThis!Share to TwitterShare to FacebookShare to Pinterest
Labels: Minecraft