My daily use keyboard is a GMMK TKL, with Kaihl Bronze switches (clicky), and SA profile keycaps from MaxKey.  It's a decent, inexpensive entry to the world of mechanical keyboards.  Mine is a "customized", with hot-swap sockets so that I can experiment with various key switches.

And while I like the feel of the clicky keys (and the Kaihl Bronze are very sharply clicky), it's a really noisy keyboard.  It's lightweight, and the stabilizers rattle, and if I'm being heavy on the spacebar, I can hear other springs in the switches vibrating (the switch to working from home really pointed out just how loud this thing was, all the little sounds it makes as I was typing).

And so I found myself ordering a bunch of new stabilizers, some lubricants, and while I was at it, a bunch more switches to play around with. 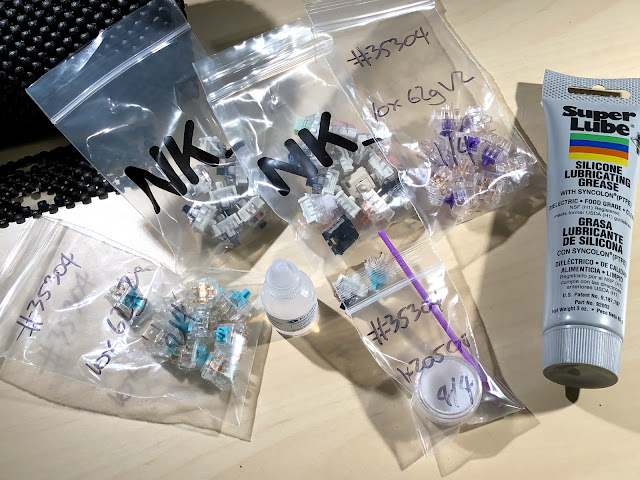 And then I followed these instructions: https://rama.works/silencing-stabilisers

Here's the sound of me typing, before any modifications.  Click here for sound

In particular, here's me mashing on the space-bar: Click here for sound
It's not very pleasant sounding.

Here's a spectral plot of that clip.  It's three downstokes plus upstrokes in rapid succession.  Notice the high frequency energy above 3kHz, the long smear of ringing at 10-13kHz, and the size of the "thump" on the downstrokes at 100Hz:

First I swapped out the stabilizer that the GMMK came with for the Cherry one, and then recorded it.  Click here for sound

It was a bit better, but not a huge improvement.

But, notice in the spectral graph that the upstrokes now have a lot less ringing (all across the frequency range), and how most of the hotspots between 1kHz and 12kHz are gone, replaced with a tighter ringing at ~1200Hz and 2400Hz, with almost none at 3600Hz:

Next up was doing the clipping mod, lubricating it, and putting down some pads made from fabric band-aids where the stabilizer sliders strike the PCB.  Click here for sound

This was a more subtle change, to my ear.  It seems like less "rattle", but it's not nearly as impressive as the first step.  Although I did find that the low frequency sound was drastically reduced.  I'm pretty sure this is the bandaid mod softening the impact again the PCB.

From the spectral plots, there's definitely less ringing of the ~2Khz tone after the key strokes, and maybe a faster dissipation of energy in some of the bands.  But without something like a waterfall plot (this same data as a 3D plot), it's harder to visualize.

I toyed with filling the space bar with foam. While it was an intriguing sound, it made the movement mushy, so I pulled it back out.  Click here for sound

I'll probably experiment more with that later, because that's closer to the sound I'd like.

Note the much, much faster dissipation of energy after the keystrokes, and the reduction in the size of the hot-spots at 2kHz and 12kHz.

Step 4 - Do the rest of the stabilizers

At that point, I was pretty happy with things, so I went and did all the other stabilizers on the keyboard.  And I was pleasantly surprised to discover that after doing the rest of the stabilizers further quieted the spacebar.  Click here for sound

And it's readily apparent in the spectral plots.  The ringing is substantially reduced, even over having foam in the spacebar (which was removed).  The upstrokes in particular are much less noisy.

After doing all 5 stabilizers, the sound when typing is now this:  Click here for sound

That last change (after doing the other stabilizers), a discussion with a friend that started me looking into this, and a bunch of reading has led to me think a bit about how vibration travels through the keyboard.  Especially since I don't "press" keys.  I tend to fully bottom them out with a solid whack.   I should probably look into switch with stronger springs that will slow down the key as it nears the bottom of the stroke (or just pick up springs, because that is how this particular rabbit-hole works...

But when hammering on a key (like my thumb on the spacebar), I'm driving the key stem down to the bottom of the switch housing, which is then transmitting that force into both the PCB of the keyboard and the "plate" that all of the switches are mounted on.  And then that's a wavefront that travels through the extremely undamped aluminum plate, and the somewhat but not really damped PCB, which can then make other things rattle (like the stabilizers in other keys).


Things I'm going to be playing with next:


I experimented some with the leftover/spare Kaihl Bronze switches that I have:
A bunch of switch lubing guides say to use the thicker greases (e.g. 205) for linear switches, but not for a clicky, as it mushes up the click mechanism.  But since the Kaihl clicky switches use a separate click bar (vs. the whole big piece that moves in a Cherry Blue), it's slightly different with the Kaihl switches.4

And then there are the other switches to play with in that photo:
Posted by Aaron Wood at 9:55 PM