With the working from home due to COVID-19, I decided it was finally time to upgrade my service.  I moved up to the gigabit plan (mostly for the extra upload bandwidth), and that also required a new modem, so bought an Arris SB8200.  It's DOCSIS 3.1, but is apparently synch'ing with my CMTS via DOCSIS 3.0, so these tests are with it in that mode.

I ran a couple raw wired performance tests, and saw the expected ~940Mbps download, but upload was seesawing all over the place.  Per http://fast.com, download latency was negligible, but the upload was up well over 200ms.

So I moved behind my home router (WRT1900AC running OpenWRT), and ran a set of tests with https://flent.org.


All tests were performed on my laptop (2015 MacBook Pro), using the Apple Thunderbolt 2 gigabit ethernet adapter, through my home network.  So there's a bit of noise from that aspect of the setup (there are two simple GbE switches between my desk and the router).  But this is also the setup I mainly work with, so it's the one that I wanted to test.

I started by turning off SQM on the WAN side, and running a flent "rrul" test and seeing how this was going to turn out: 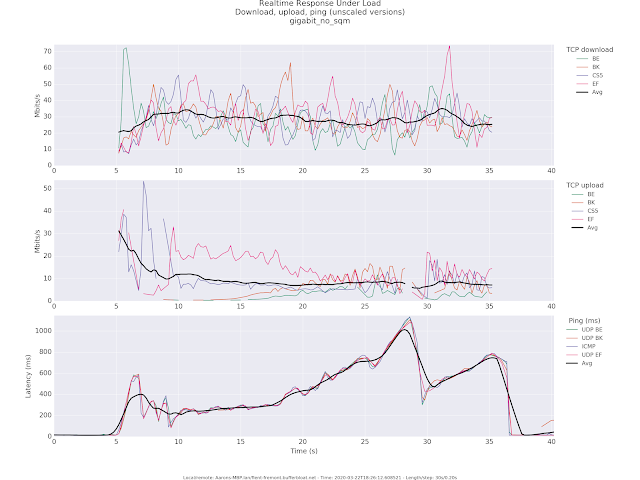 Definitely not pretty.  But the download bandwidth was constrained by the router, so I guessed that the latency was all on the upload side, so I ran an upstream-only test 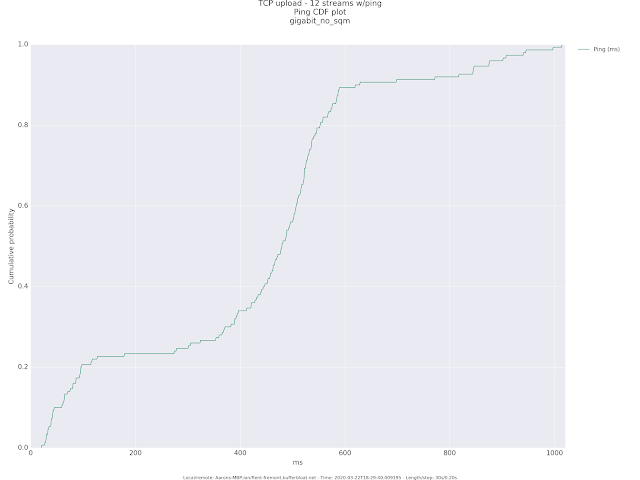 Which pretty much confirmed that it was primarily an upload issue.

A Piece of Cake to the Rescue

Skipping ahead to the end, here's the final result, using "piece_of_cake.qos" and limiting uploads to 35Mbps, and not restricting downloads at all (letting cake and fq_codel do their work since the router was already the bottleneck). 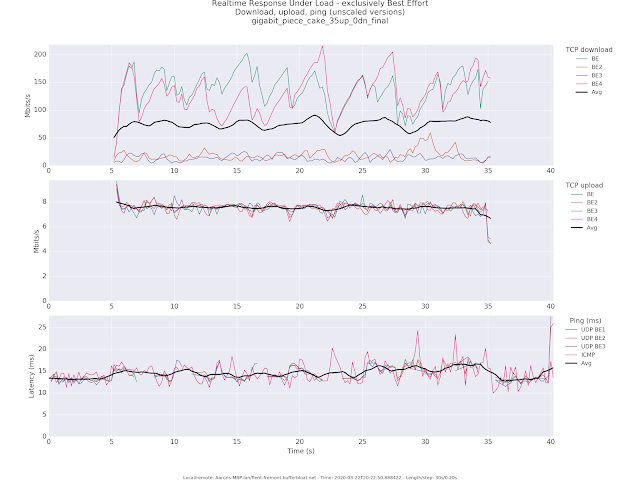 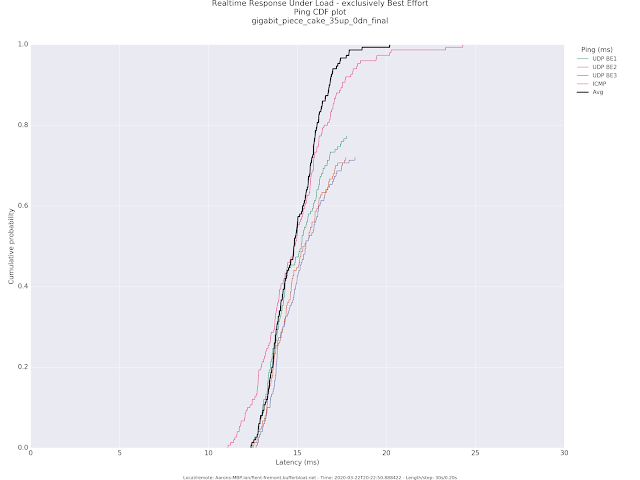 I need to sort out what's going on with the poor sharing.  That could be a few different things (including the upload competition for bandwidth for acks).

But the latency difference is astonishing.  I've increased overall throughput, and there's no additional latency from the load. 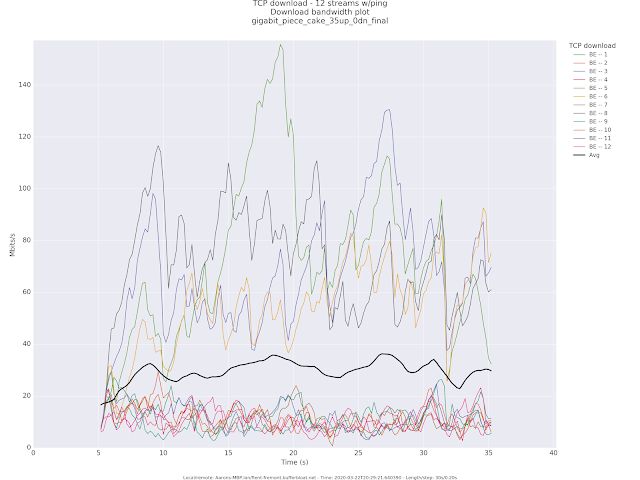 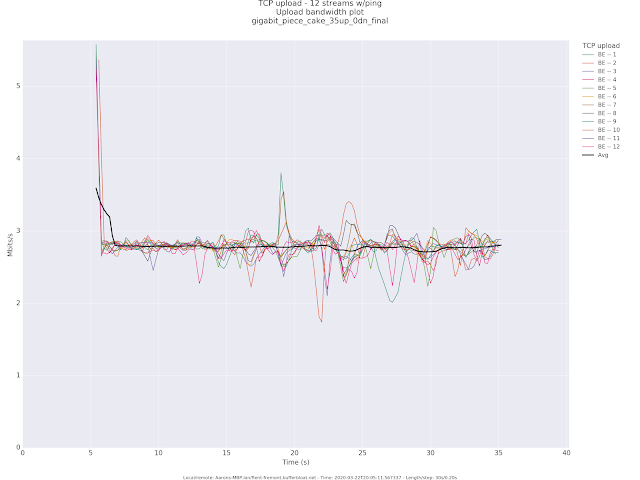 Cake, however, has made the upload look amazing. 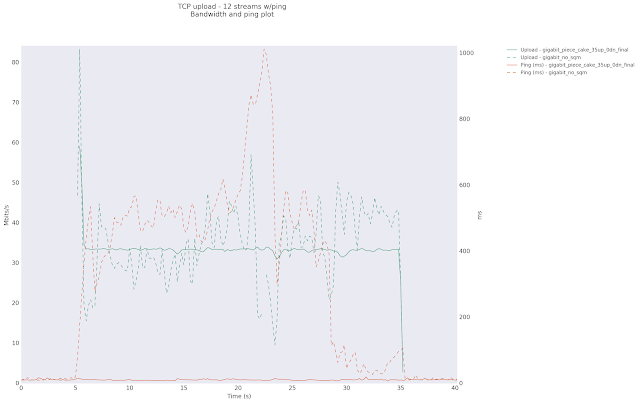 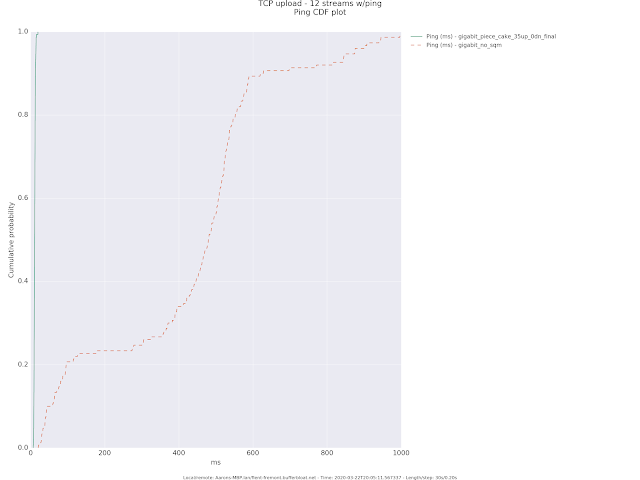 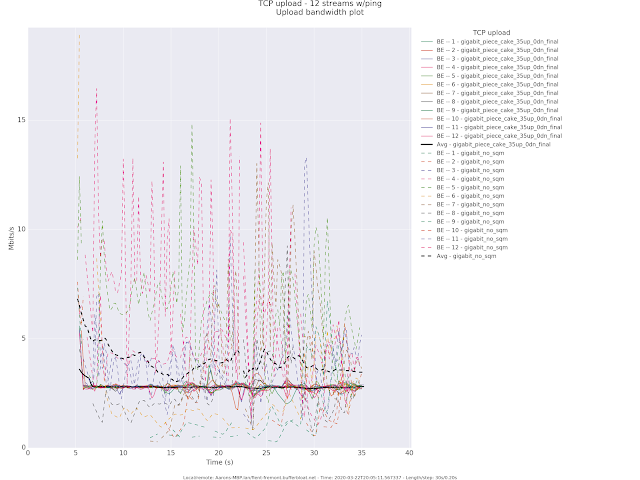 I'm leaving a little bit of upload on the table, I think, but overall, not a lot, especially for the gains in latency control.
Posted by Aaron Wood at 8:52 PM