From rue Lepic up to Sacré Coeur

A couple weeks into our stay here, we went on a walk from our apartment up to the top of the butte in Montmartre.  It was a rare sunny day, before the rains of spring had broken and given us summer.

This is the typical tourist route, and it was pretty busy with tourists while we were out.  A lot of these photos are framed slightly above street level to miss the large groups.  It's also worth comparing this photo with the one below to get an idea of just how much some sun transforms the way this city looks: 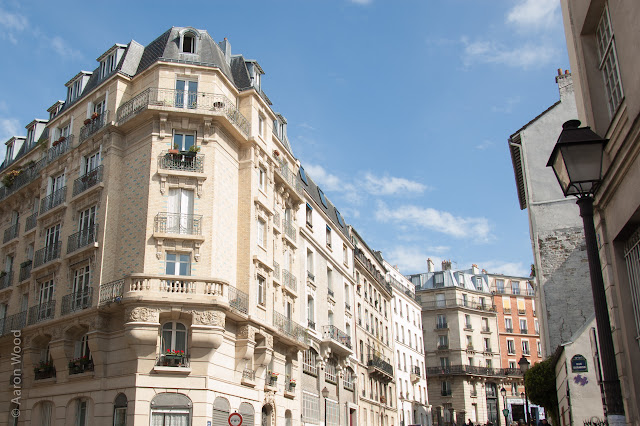 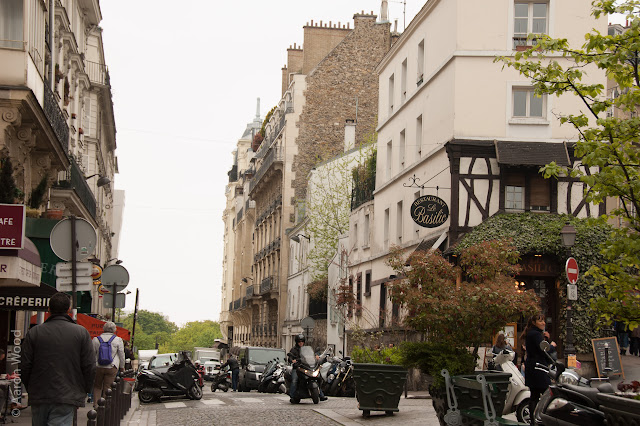 It's so much more cheery when the sun's out.

The Hausmann architecture of the city really comes into it's own when the sun's out.  The slate-colored roofs and wrought iron railings contrasting with the cream of the limestone façades and the blue of the sky. 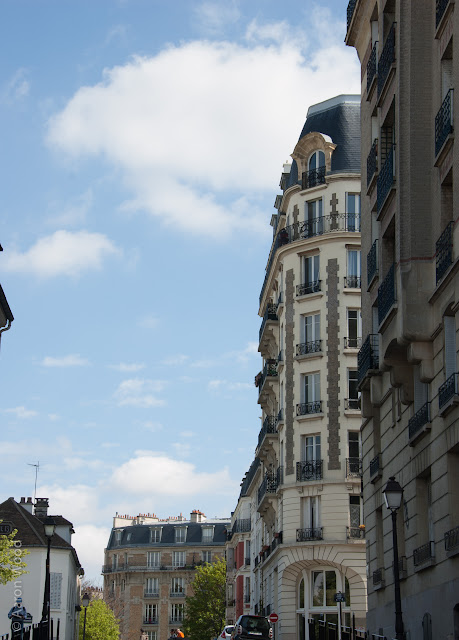 At the corner of rue Lepic and rue Norvins, there's a small building that I've been unable to determine what it is (I remember figuring it out last time we were here, but I've forgotten).  But it had a bunch of pretty flowers growing around it. 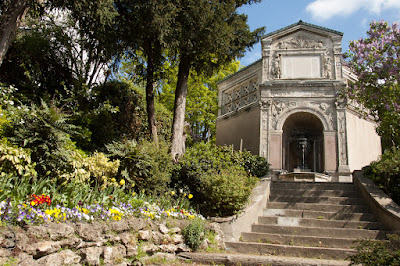 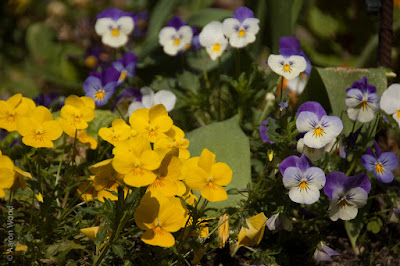 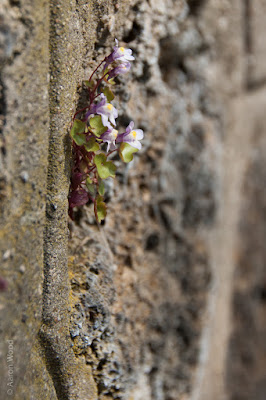 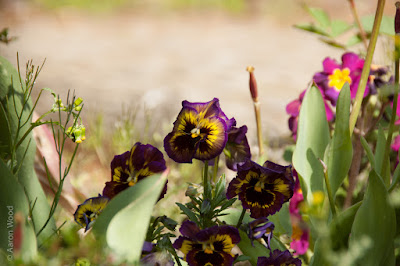 We headed up rue Norvins, past Place du Tertre, where all the artists hang out selling portraits.  (photos from winter 2011):

And then around rue Azais towards Sacré Coeur, when we found this woman playing french classics on accordion. 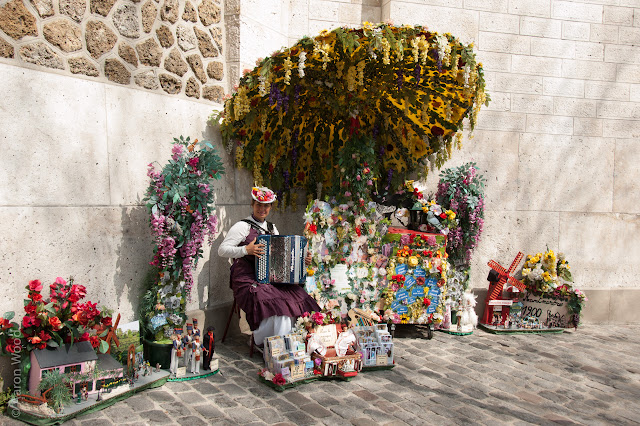 I really liked the reflections and light on the accordion... 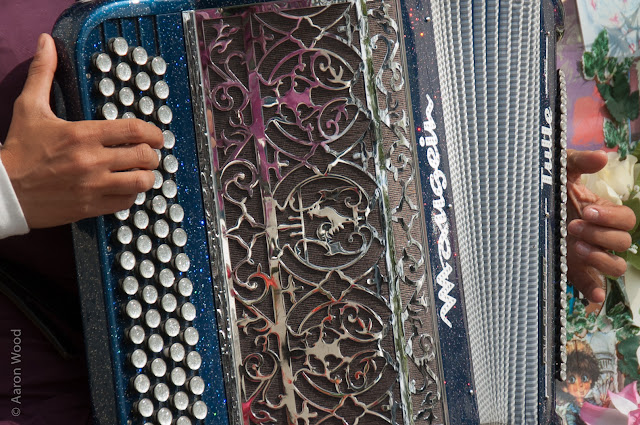 And then the Basilica du Sacré Ceour itself finally came into view.  It's such a lovely building. 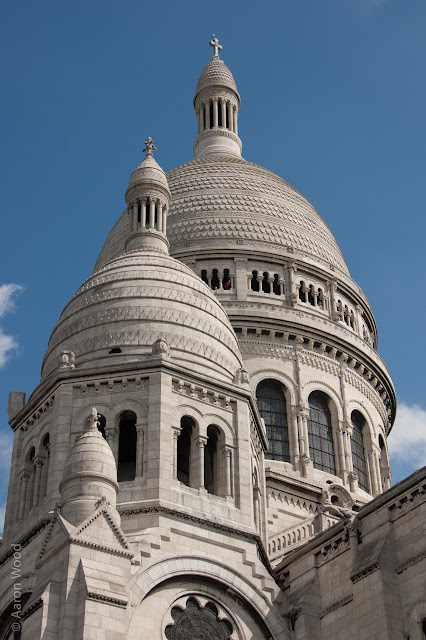 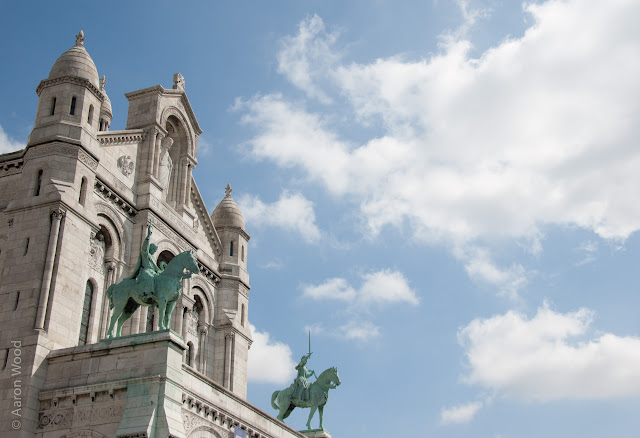 It's appropriately awing when standing in front and looking up. 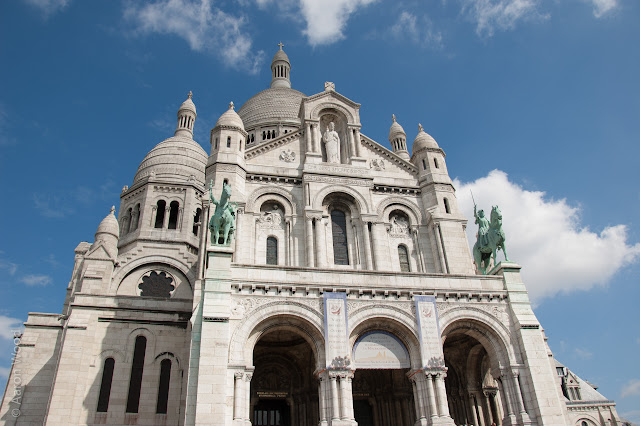 The view from in front of the basilica is very impressive.  Sacré Coeur is, while not technically the highest hill in the city (it's the second-highest) has an amazing view to the South. 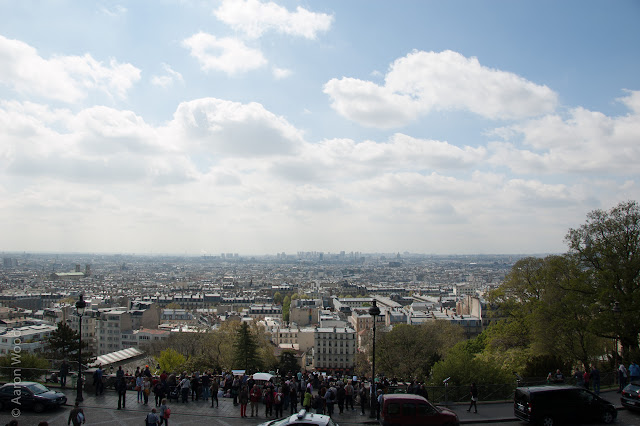 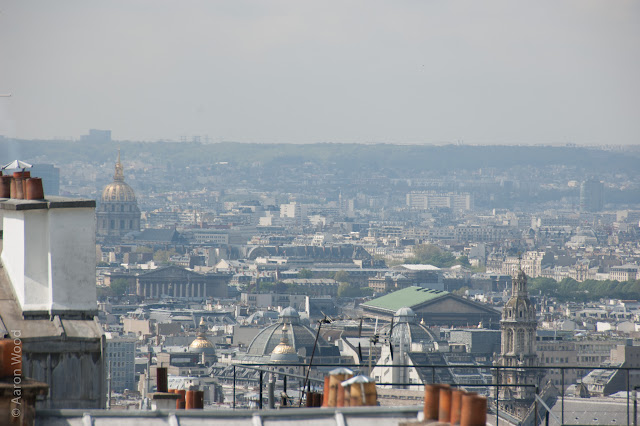 Unfortunately, you can't quite see the Eiffel Tower from the front of Sacré Coeur.  The view is blocked by trees, buildings, and the funicular which climbs the massive hill (these next three photos are from our winter 2011 trip).

But if you squiggle around to rue Saint-Eleuthere, you can see the Eiffel Tower 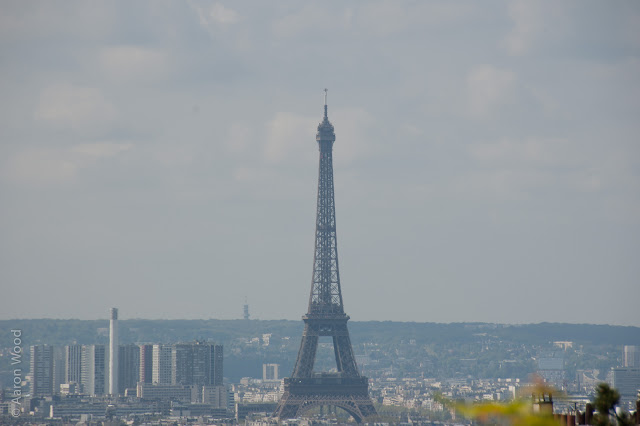 and this amusing bit of street art. 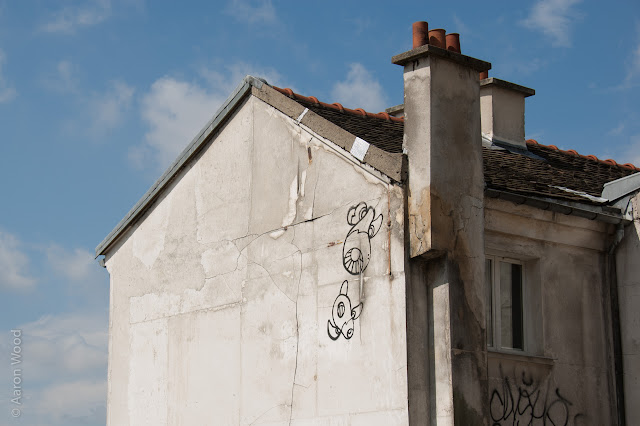 From up here on the hill, looking down on Paris, you can really see how consistent the heigh of the buildings in the city are.  In medieval Paris, the height limit for buildings was 17.5 meters.  In the mid 1800s, when Napoleon III was Emperor of France, he massively upgraded the medieval city by leveling city blocks to build Paris's famous, beautiful, wide boulevards.  This is called the Haussmann's renovation of Paris.  Part of that was to increase the height limit on buildings to 20m.  But that limit stood for decades, and as a result, almost all the buildings in Paris are the same height (or close to that height). 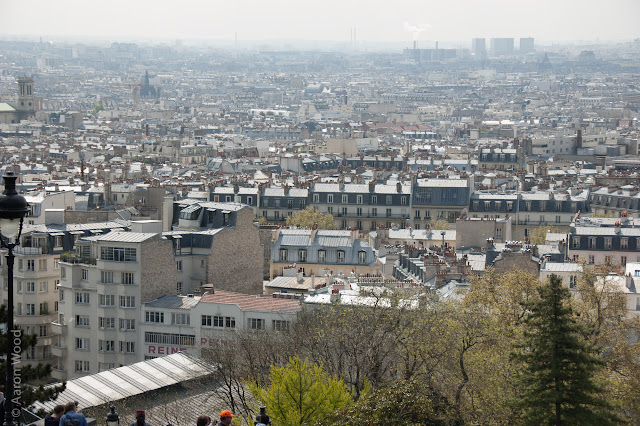 It has a very "rooftops of Mary Popins" feel to it.

Another requirement from Hausmann was that the roofs all have a pitch steeper than 1:1, within view of the street.  The barn-like roofs (called Mansard roofs) with their garret apartments allowed that attic space to taken advantage of to get another floor of units into the builds.

The wide boulevards, the mansard roofs, and the beautiful façades of locally quarried limestone, became the iconic view of "what Paris looks like."

While we were up on the top of the hill, the sunshine was welcome, and the little Schmoo found it quite nice while riding on her Mother's shoulders. 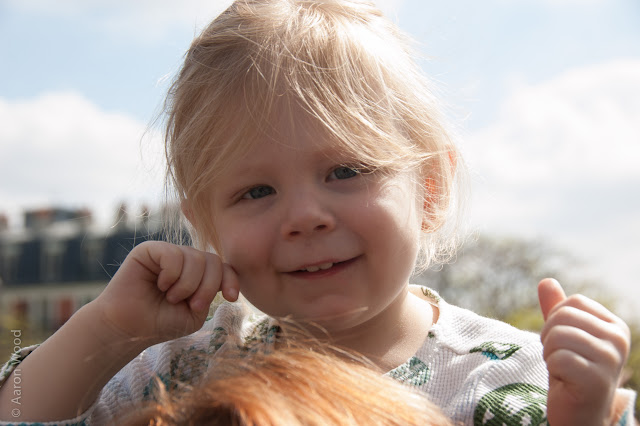 We wandered back down, taking a different route, trying to see more of the city.  As a tip, if rue Norvins is packed with tourists, and you want to bypass Place du Tertre, you can cut down rue Saint Rustique, which parallels Norvins, and it's empty.  Highly useful for when you're feeling done-in by the crowds.

We cut down the stairs at rue Tholozé, finding it to be a pleasant walk.  We also found a store where a couple weeks later I finally picked up a lightweight, short trenchcoat which has made being outdoors here in Paris far more comfortable.  There's a reason they're the ubiquitous jacket. 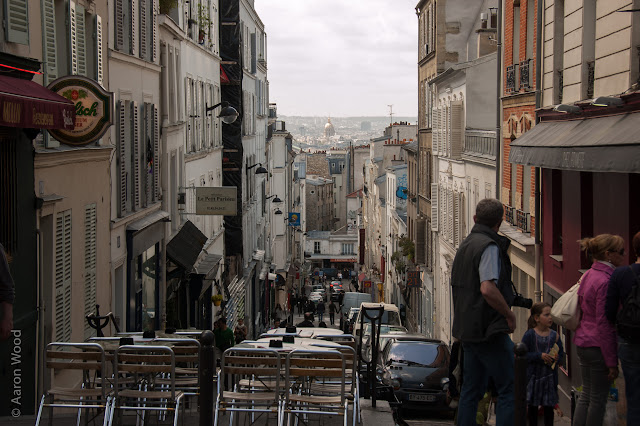 I love the views down the stairwells in Montmartre.


Here's a link into the full album of photos at Google+, where I've geo-tagged all the photos.
Posted by Aaron Wood at 10:55 AM