Notre Dame is probably Paris's second most famous landmark.  This is my quest to get some decent photographs it.


The first week we were in town, we went to the Île de la Cité, the Island of the City, in the middle of the Seine.  Unfortunately, it was overcast and grey.

The cathedral is amazing.  The scale is hard to wrap your head around as you walk up to it. 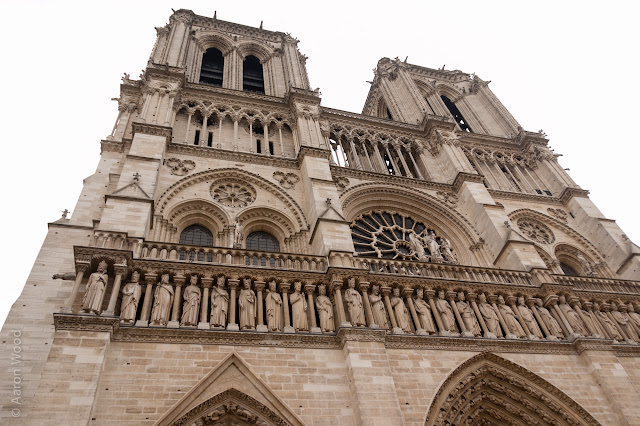 We climbed the temporary bleachers that face it (setup for the 850th anniversary of the cathedral), and admired it.  But none of photos from that really came out well.

We walked around it's south side, through the park between it and the edge of the island.

There's a great view from there of all the detail that went into the upper stories: the buttresses, sculptures, and gargoyles. 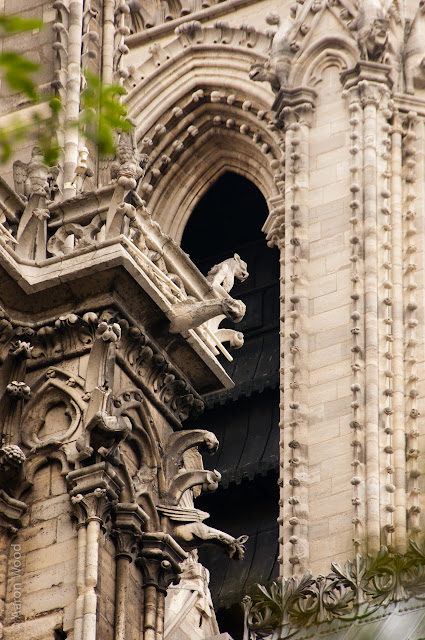 The best find there, though, was the small playground.  My daughter had a blast.  I love that Paris is sprinkled with little playgrounds.

We walked around the south side, and then crossed the bridge at the east of the island so we could go to the other island, Îsle Saint-Louis, to get lunch and (hopefully) some Berthillon ice cream.  No luck on the ice cream front.  But as we crossed the bridges, we saw that the view of the cathedral was better from the bridges and the Left Bank. 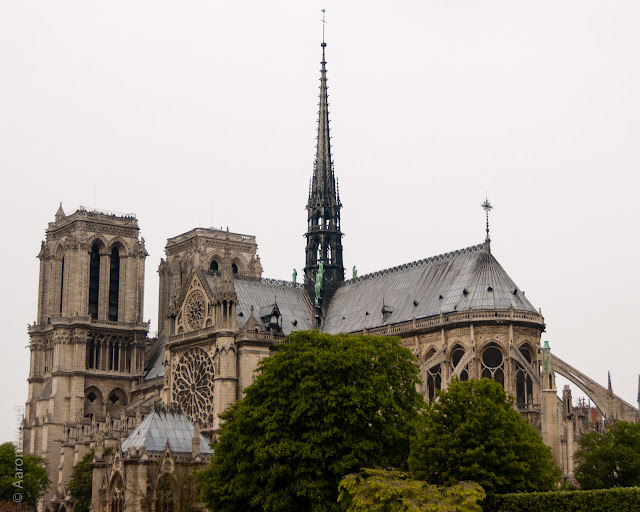 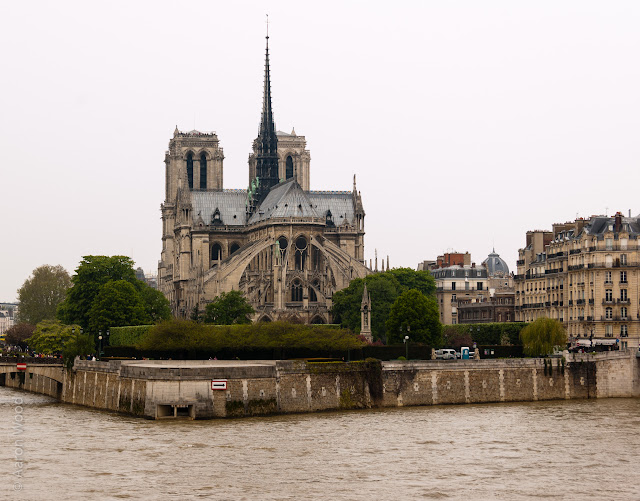 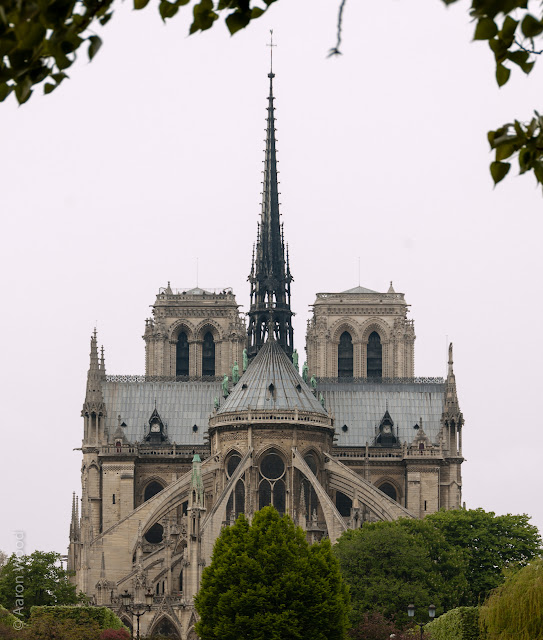 This is taken from Îsle Saint-Louis, right at the edge of the wall, above the quay.

But an overcast day just doesn't make for great photographs.

So during our week off that we took in July, we tried again.  No go, it was overcast again, and the lines were ugly, so we went to Ste Chapelle instead.

So about a week ago, the weather looked nice, with lots of big puffy clouds going past, so I decided to head back down while my daughter was napping, and see if I could finally wrangle some good photos of the cathedral.

And I planned ahead, thinking that I might have the best luck on the edge of the Left Bank.  And I think I was right.

I took the Metro to the Cité station, and then headed straight South, crossing the Petit Pont.  I was rewarded with a view of the cathedral that was about the right scale to actually see it, but there were trees in the way from here at the middle of the bridge. 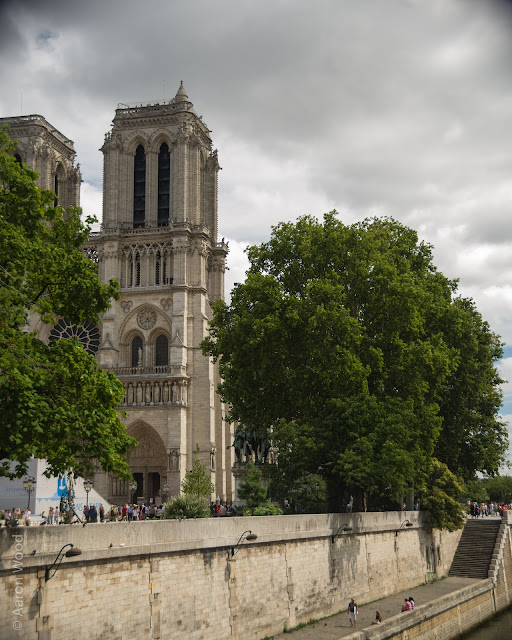 So I finished crossing, and starting walking along the edge of the sidewalk, peeking at the cathedral through gaps between the sales stalls. 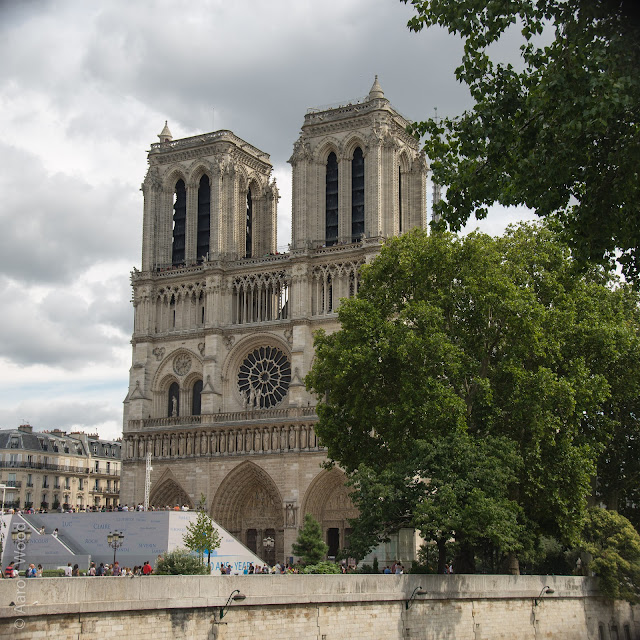 Getting better.  But it wasn't until I got to Pont au Double, the pedestrian-only bridge that runs to right in front of the cathedral, that I started getting some great views. 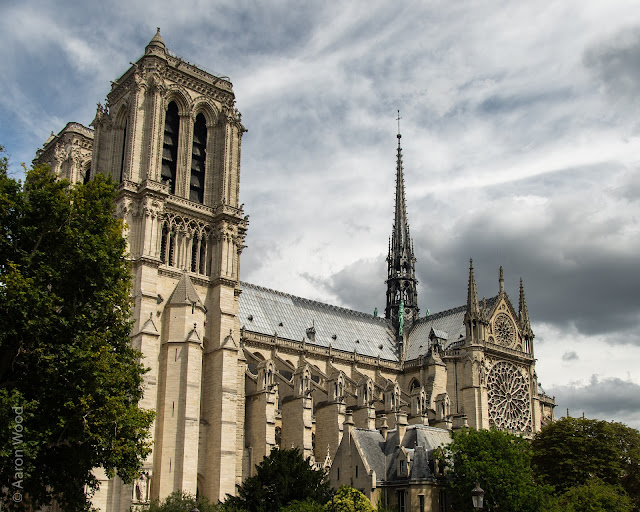 Then I went down the steps and started taking photos from down on the quay.  It's really a great place to view the cathedral from: 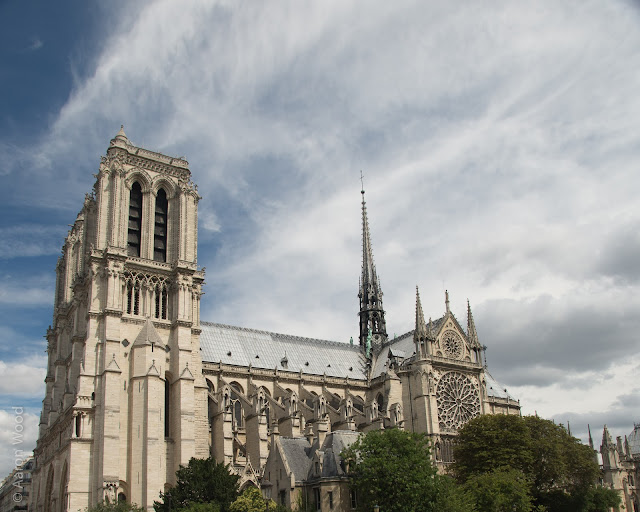 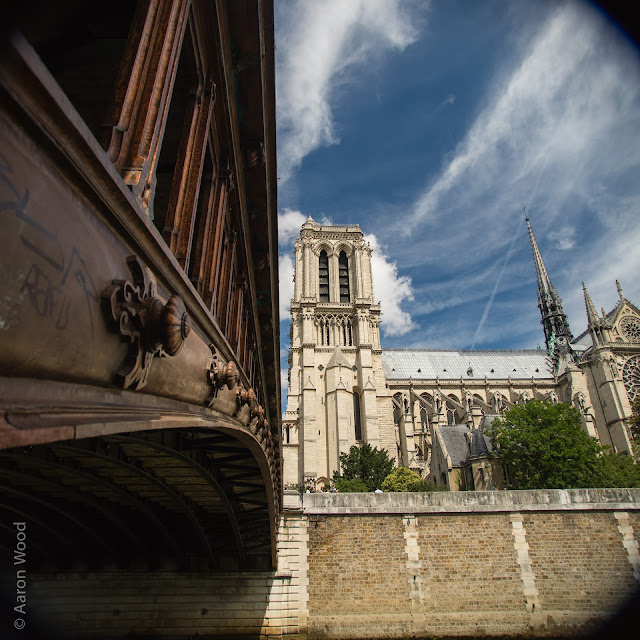 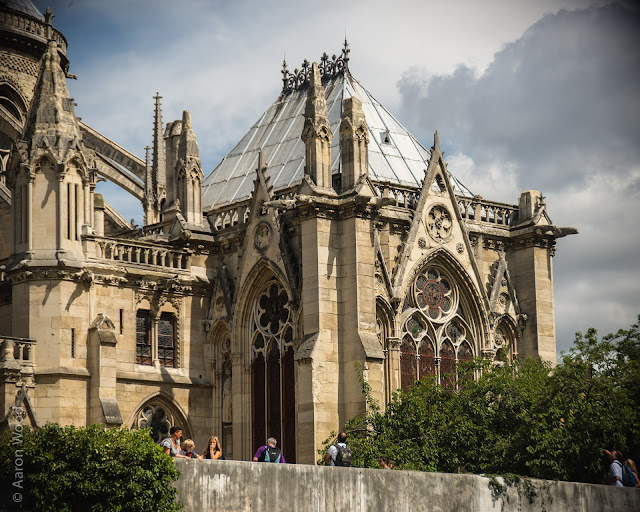 It's nice being able to get some glimpses of people for scale, too. 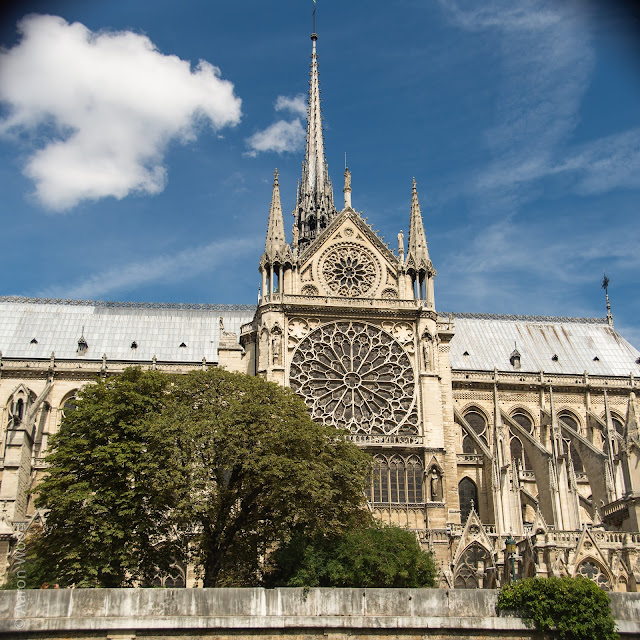 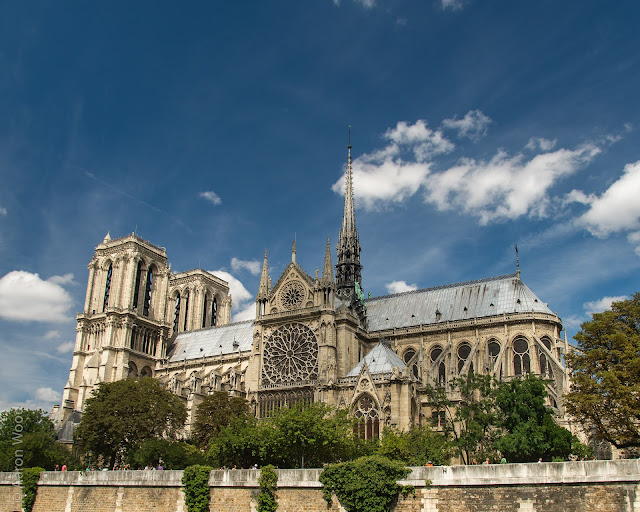 And from there, with a long lens, you can still make out all the wonderful detail, which is easier to see now that the sun is out. 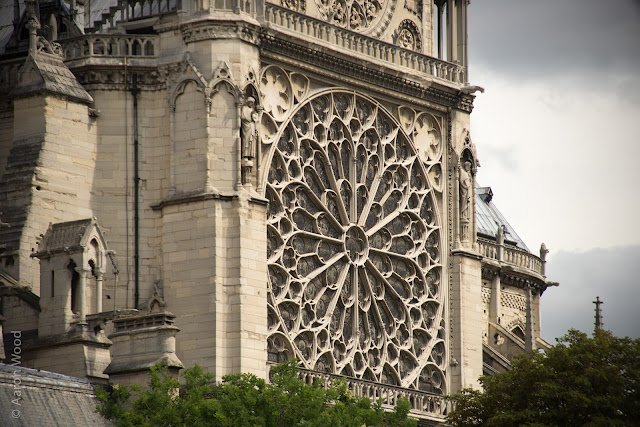 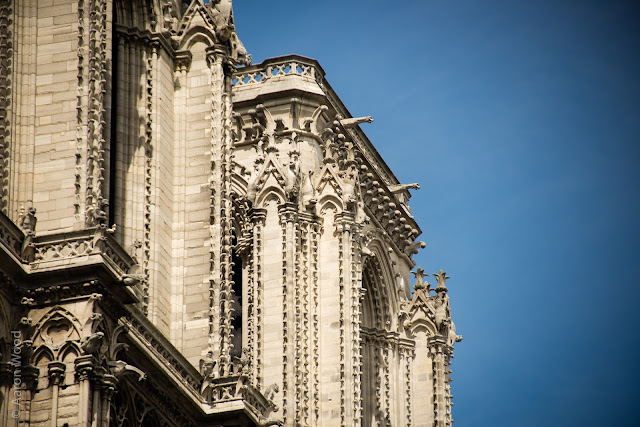 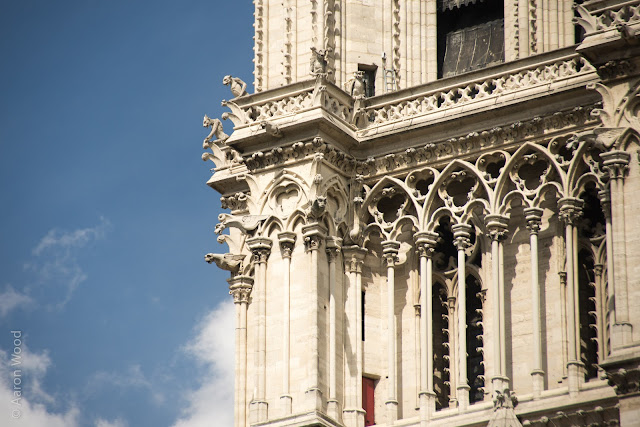 I admit to having a soft spot for the gargoyles.

Once again, the view from Pont de l'Archevêché is wonderful.  Although not everyone is a fan of the locks. 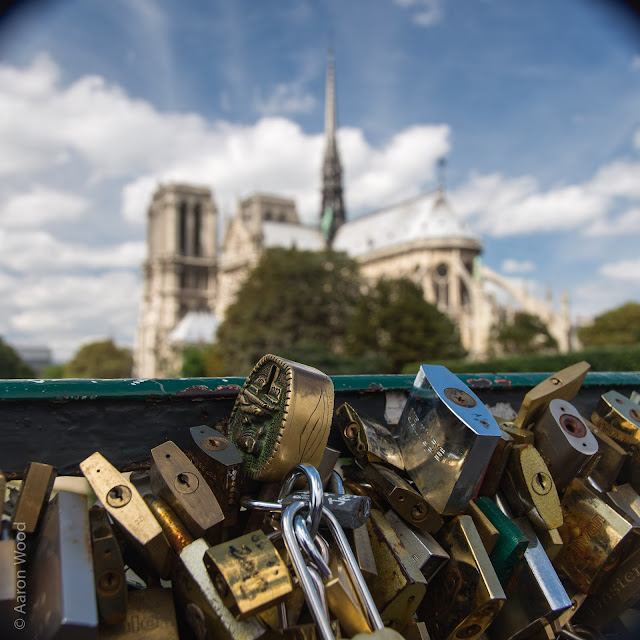 I ended in Square Jean XXIII, which is at the East end of the cathedral.  It quite a lovely place, with the fountain and all the flowers. 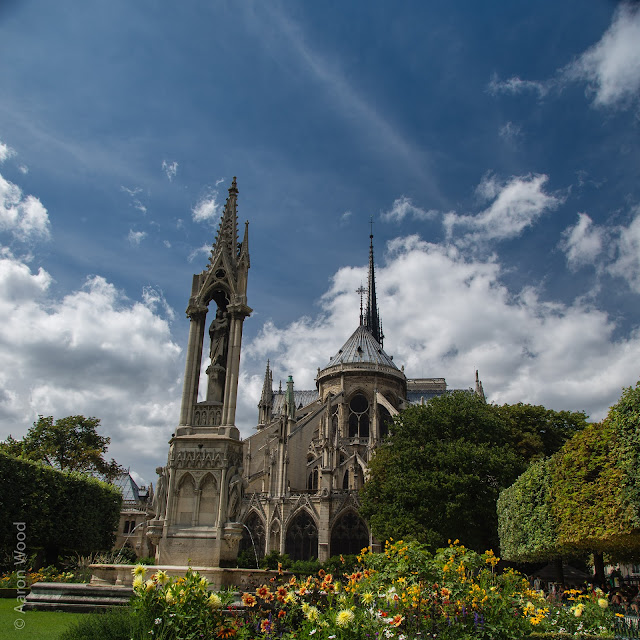 The full set of photos from the last trip are here, with geo-encoding if you really want to see where I was standing.
Posted by Aaron Wood at 12:40 PM