My new neighborhood in Paris: Pigalle, Lepic, and Abbesses

One thing that I remembered from my last trip here (2 years ago) was that Paris has a lot of surprising juxtapositions. But usually, it's just architectural.  Seeing some 20yo building made to look like a palace next to a glass and metal wonder.

In scoping out the current flat that we're staying in using +Google Maps and Street View, I noted that the end of my street was one of the big boulevards. I didn't pay too close of attention to which one it was. Perhaps I should have.  It's Boulevard Clichy.

My first walk to the Monoprix was a bit surprising, and disorientating. If you're not sure why that would be, you'll see a couple pics below.

But then I noticed the sheer variety of people walking down the center of the boulevard, and realized that they just didn't pay any attention to what was off on the sides.  In fact, in another few weeks, as everything leafs out, you'll barely be able to see what's on the side of the boulevard from the central promenade.

So, where is this?  First, the view down the promenade of the boulevard (in the median): 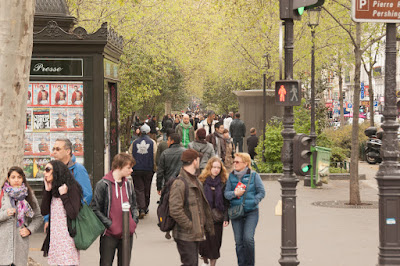 But the sides of the road, where the businesses are.  Well, a different scene exists there: 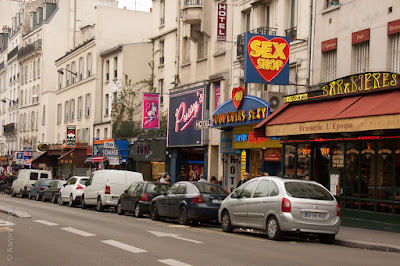 After being hit up by a couple different establishments to come inside, I ducked over to the promenade, and had a nice stroll to the store.

But it left me wondering if we'd inadvertently moved to the seediest part of Paris.  And while wandering down the promenade, trying to figure out the area, I noticed some contrasts, like this little alley entrance: 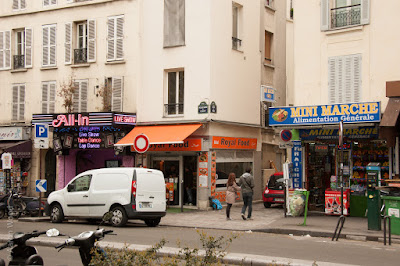 
And this building, right on the blvd, is very classy looking: 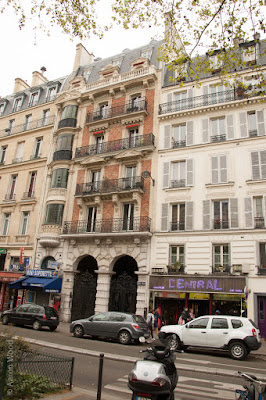 And the people that I saw coming and going from these were surprising. They simply seemed to be ignoring everything, or they just didn't care.

As a newcomer, I really don't know. But the casual attitude of those walking on the blvd seemed to be one of everything around them as normal.

For someone that grew up in the Midwest (Michigan), and then moved to Northern California, this is honestly surprising. It's not that there aren't areas with these sorts of stores in places that I've lived, but that they ONLY exist in very rough areas. And that doesn't seem to be the case here.

Especially when one makes it to the famed Moulin Rouge itself, and heads up rue Lepic: 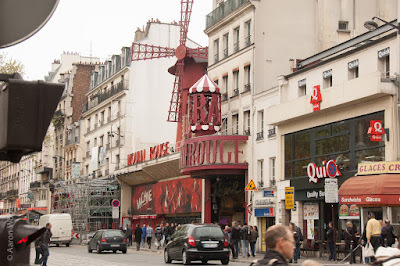 Where you find the quaint little diner from Amélie: 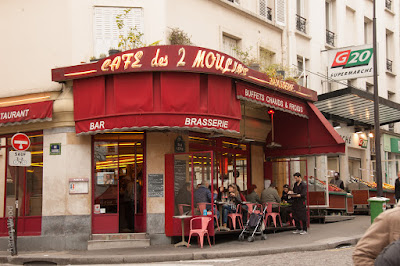 Apparently it's now a big tourist destination. I admit to being intrigued (as I love the movie), but it's not the same cafe, it's just the same building.

Unfortunately, as the day I was taking these photos was France's "Labor Day", almost all the little shops that give Rue Lepic a special feeling were closed. But this one was open: 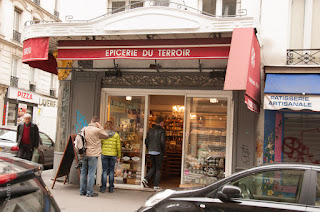 A glance down rue Véron shows that all the on-street parking on this back-street is full, so Abbesses must be pretty busy. 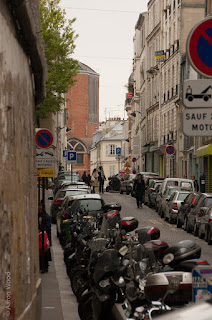 And then we arrive at Abbesses itself, a very short walk up the hill from Clichy.  So far, we've travelled about 600m (per Google Maps). And that walk up Lepic is only 200m long. Things change quickly here. 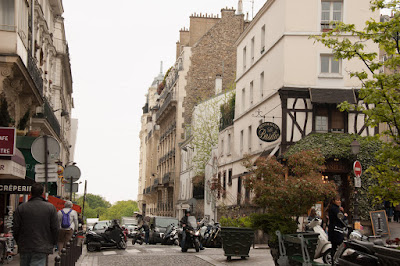 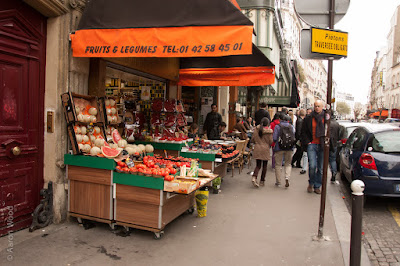 Taking a glimpse back down my own street (rue Germain Pilon), I was surprised to the the Tour Montparnasse looming in the distance: 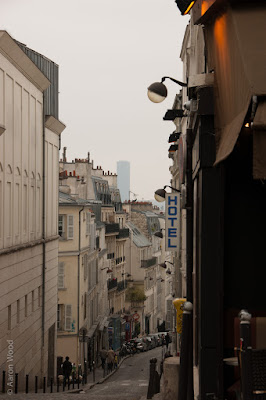 Man that thing is big, and ugly. No wonder it caused a commotion when it was built. Standing at the same location, but on the other side of rue Germain Pilon, and looking in roughly the same direction, another building came into view.  I'm pretty sure that it's the Palais Garnier of the Paris Opera. 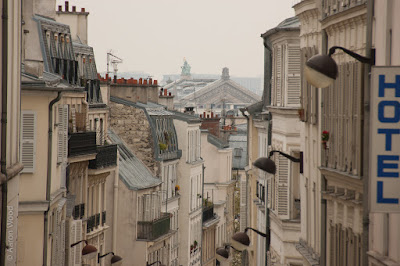 Moving on, my favorite neighborhood boulangerie: 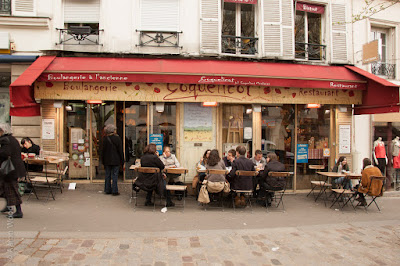 And then the square where Abbesses station itself is, with it's lovely church 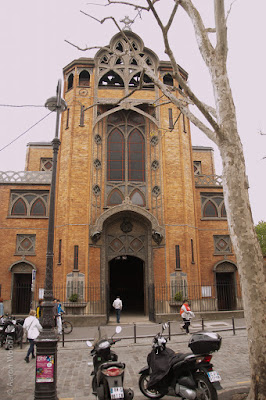 Which has a great deal of beautifully painted stained glass work inside: 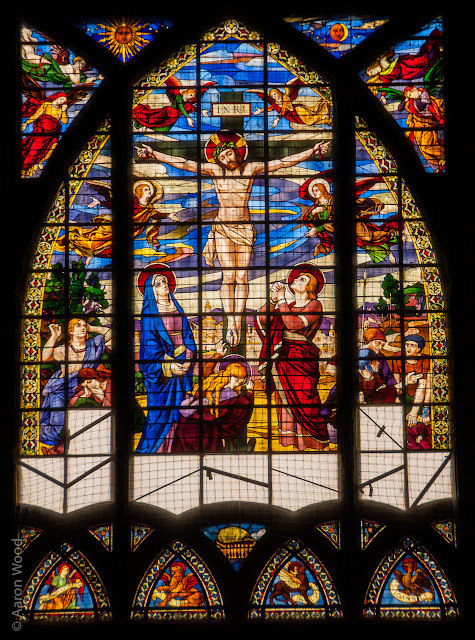 as well as some stutuary: 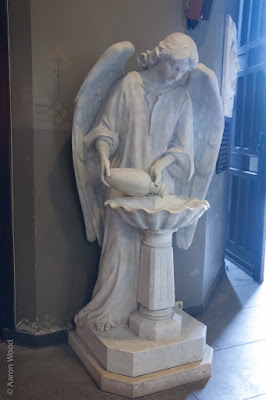 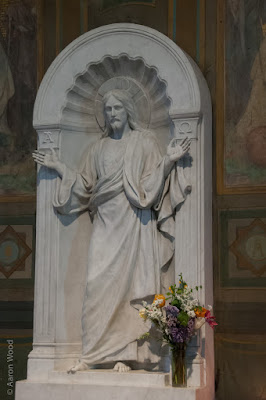 A few visitors were leaving candles, and there were two people actually there to pray (not photographed for obvious reasons). 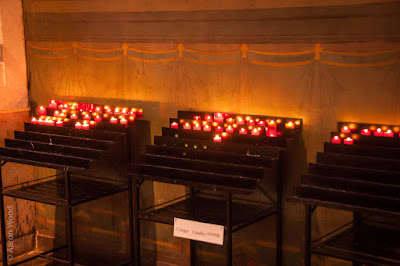 The floor is a wonderful parquet which was lovely in the light coming through the stained glass windows: 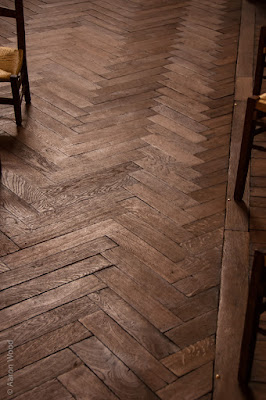 But the real surprise was at the back: 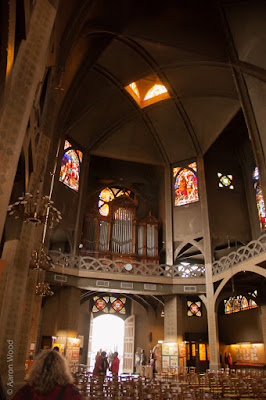 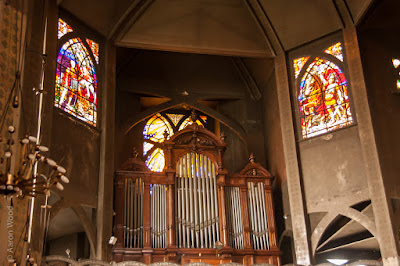 And then, right across the street, the carousel: 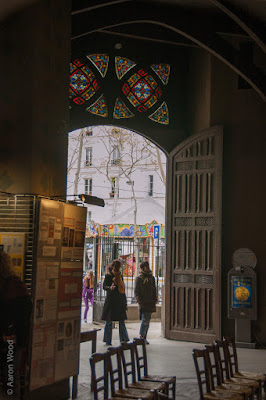 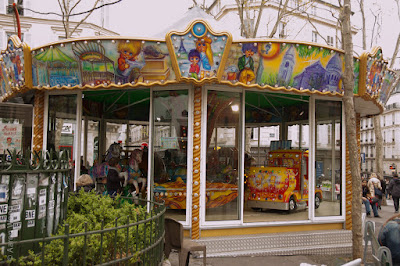 My toddler hasn't ridden it yet, but her eyes light up every time we go past it.

This is Square Rictus, which has a nice, albeit *very* small little playground in it, right behind the metro stop. It's very easy to miss. 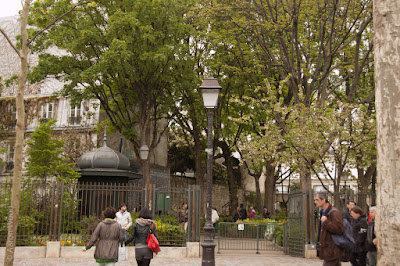 As a parent, one of the things I love is the number of little parks and playgrounds scattered through the city.


And then a view of the back of the bell tower, as we head down the stairs to rue Andé Antoine, to link back up with rue Véron, and head back towards home (well, home for now). 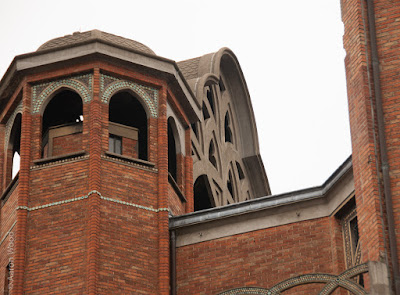 As I turned back onto rue Germain Pilon, I saw this passage again, and decided that since I was in full photo-tourist mode, I might as well look down it. Usually there are kids playing in it, but not today. 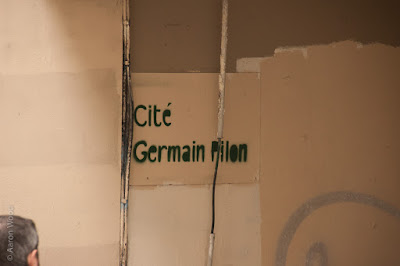 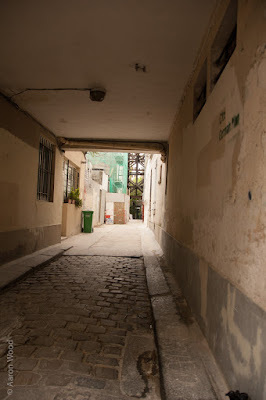 I had been wondering what was making it look so dark back there, and then I found out: 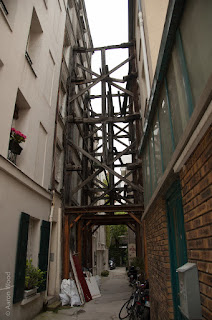 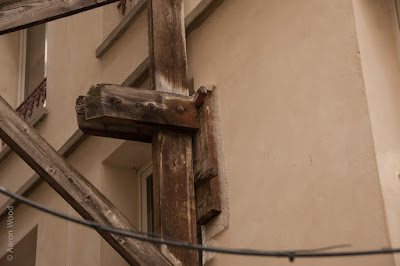 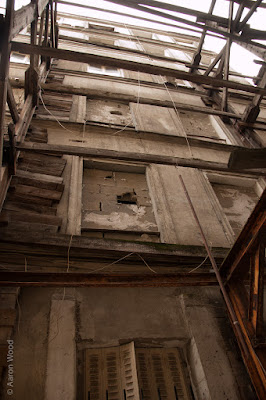 It appears to be a structure for holding up the facade of the building while they reconstruct it?

as dark and foreboding as it looks to my eyes (especially at night), the street was cheerful, with the laughter of small children playing in the background. at the end, it nearly meets Cité du Midí, from the start of the thread.